Sohail Ahmed played the innings of his life as he hammered an unbeaten 44-ball 66 to lead Bahrain to a thrilling six-wicket victory over hosts Malaysia in the final of the 2022-23 Malaysia Quadrangular T20I Series at the UKM-YSD Cricket Oval in Bangi. The historic triumph is Bahrain’s first tournament win in international cricket since […] 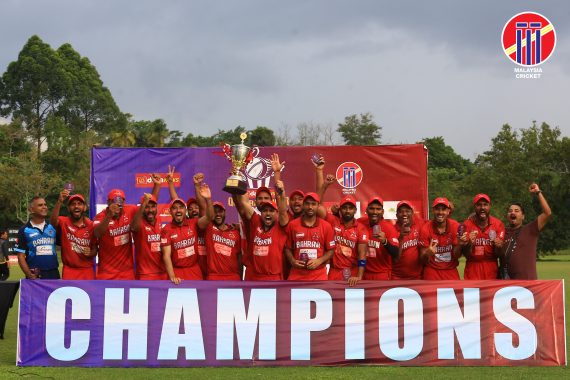 Sohail Ahmed played the innings of his life as he hammered an unbeaten 44-ball 66 to lead Bahrain to a thrilling six-wicket victory over hosts Malaysia in the final of the 2022-23 Malaysia Quadrangular T20I Series at the UKM-YSD Cricket Oval in Bangi.

The historic triumph is Bahrain’s first tournament win in international cricket since the team made its T20I debut against Saudi Arabia in Muscat in 2019.

After Bahrain started their pursuit of 154 to win off their 20 overs, Ahmed came in to bat with the score 37 for two in the sixth over and immediately took charge of the run-chase as he partnered with opener Prashant Kurup in a 57-run, third-wicket stand off only 45 balls.

When Kurup departed, bowled by left-arm spinner Virandeep Singh for 40 off 36 balls, with his side 94 for three in the 13th over, Ahmed found another capable ally in Haider Butt.

The two added 50 runs off just 37 balls before Butt (26 off 20 balls) was caught by Singh off left-arm medium-pacer Muhammad Wafiq with Bahrain, in sight of a famous win at 144 for four after 19 overs, needing just ten more for victory off six balls.

However, there was high drama as the last over unfolded.

Player-of-the-match Ahmed slogged the first ball by Rizwan Haider, another left-arm medium-pacer, straight to long-on where Sharvin Muniandy spilt a regulation catch as he dived forward, allowing the batsmen to take two runs.

With eight now required, Ahmed hit the next ball high in the air just wide of long-on where Muniandy, struggling to judge how close he was to the boundary line as he positioned himself to take the catch, allowed the ball to land just behind him for six.

Suddenly, Bahrain required just two runs to win off the remaining four deliveries and Ahmed late-cut the next ball for four before sprinting ecstatically towards his delighted teammates who rushed onto the field to mob him in a group embrace.

Earlier, Bahrain captain Sarfaraz Ali took four for 27 off his four overs to restrict Malaysia, who had beaten the kingdom’s team twice in the group stage, to 153 for nine after their openers Zubaidi Zulkifle and Singh put on a 50-run opening stand in just 5.4 overs.

The title triumph is all the more amazing because all members of the current Bahrain squad have expatriate roots and have day jobs, meaning they can only practice in the evenings and on weekends.

“I want to congratulate the BCF board, the management team and volunteers, the coaching staff, the sponsors and, of course, the players for their outstanding performance.”

Most of all, Dadabai added, he wanted to extend his gratitude for the continuous support extended to the BCF by Supreme Council for Youth and Sports (SCYS) deputy chairman, General Sports Authority chairman and Bahrain Olympic Committee president Shaikh Khalid bin Hamad Al Khalifa.

“This victory really belongs to our players who, despite not being able to practice or play on proper grounds in the kingdom, are putting Bahrain on the world’s cricketing map,” said BCF advisory board chairman Mohammed Mansoor

“Bahrain (ICC ranking: 30) was the lowest-ranked team in the tournament, behind Qatar (23), Malaysia (27) and Singapore (29), yet it still won the competition,” he added.

“This has been made possible only due to Shaikh Khalid’s patronage and long-term vision for the sport in the kingdom.”